Now in its sixth year, the Sonoma Invitational Wind Band & Orchestra Festival is one of the Music Department’s signature educational outreach events that will feature over 40 high school ensembles from throughout California, who will have the opportunity to perform in Weill Hall and receive comments from nationally acclaimed collegiate band and orchestra directors. This is a non-competitive, non-rated festival, with emphases on musical artistry and education.

Public performances by the ensembles begin every half hour between 8:30 am until 6:00 pm.

Kevin Sedatole serves as Director of Bands, Professor of Music, and Chair of the conducting area at the Michigan State University College of Music. At MSU, Professor Sedatole serves as administrator of the entire band program totaling over 700 students that includes the Wind Symphony, Symphony Band, Concert Band, Chamber Winds, Campus Bands, Spartan Marching Band and Spartan Brass. He also guides the graduate wind conducting program in addition to conducting the MSU Wind Symphony. Prior to joining MSU, he held positions as associate director of bands at Baylor University, the University of Texas, the University of Michigan and Stephen F. Austin State University.  Mr. Sedatole has conducted performances across the United States and Europe, as well as performances in Carnegie Hall. Most recently, the MSU Wind Symphony has given featured performances at the Midwest International Band and Orchestra Clinic in Chicago and at the College Band Directors National Association conference in Kansas City.

Kevin Noe serves as the Director of Orchestral Activities, Professor of Music and Chair of the Graduate Orchestra Conducting area at Michigan State University. A passionate supporter of composers, creators, and the arts of our time, Professor Noe has premiered more than 50 new works for orchestras and ensembles in the last ten years. Having a strong background in the theater, Noe has a particular interest in works employing a variety of art forms and serves regularly as conductor, stage director, actor, writer, and filmmaker for a wide range of mixed media, operatic and theatrical productions. He is the executive artistic director and conductor of the Pittsburg New Music Ensemble, and he works frequently as a conductor of opera, symphony, and ballet at the Jacobs School of Music at Indiana University. He is a frequent guest conductor of ensembles across the country, most recently, he directed the California All State High School Orchestra in San Jose. Noe was awarded the prestigious Maurice Abravanel Fellowship at the Tanglewood Festival. He holds degrees from the University of North Texas and Rice University in Houston, where he received the Sally Shepherd Perkins Prize in Music.

Eric Rombach-Kendall, Director of Bands at the University of New Mexico

Eric Rombach-Kendall is Professor of Music at the University of New Mexico, where he has served as Director of Bands since 1993.  Prior to his appointment at UNM, Mr. Rombach-Kendall held conducting positions at Boston University and Carleton College and taught in the Washington State Public Schools for six years. Mr. Rombach-Kendall served as President of the College Band Directors National Association from 2011-2013.  He has been a guest conductor and clinician throughout the United States and Canada and has published articles in The Instrumentalist, New Mexico Musician, and Teaching Music Through Performance in Band. He is the conductor and co-producer of five recordings with the University of New Mexico Wind Symphony on Summit Records. An advocate of contemporary music, Mr. Rombach-Kendall has commissioned and premiered many works for wind ensemble and concert band.  Works he has commissioned have been performed by such prestigious organizations as the New York Philharmonic on Live at Lincoln Center, and the United States Marine Band (The President’s Own).  He is an alumnus of the University of Puget Sound and the University of Michigan with degrees in music education and wind conducting.

James Smart, Director of Bands at the University of Montana

James Smart is the Director of Bands and Trumpet at the University of Montana where he conducts the Symphonic Wind Ensemble, teaches applied trumpet, undergraduate and graduate conducting, and music education courses.  Under his direction, the Symphonic Wind Ensemble was selected to perform at the joint 2010 Western/Northwestern Region College Band Directors National Association Conference in Reno, NV and the 2013 NAfME All-Northwest Conference in Portland, OR.  Dr. Smart is also the founder, producer, and co-conductor of the annual Fusion Concert where over 25 acts showcase the diversity of the UM School of Music in one seamless stream of music. He holds a Bachelor of Music in trumpet performance and music education from the University of Michigan and a Master of Music Education and Doctor of Musical Arts in Conducting from Arizona State University.  Dr. Smart is in demand as a conductor and clinician throughout the country. 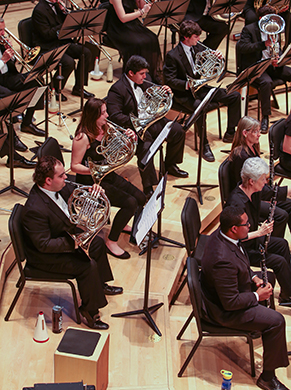 TAIKOPROJECT  was founded in 2000 in Los Angeles by a group of young, emerging Taiko drummers seeking to create a truly American style of Taiko by blending the traditional forms in