Wreck-It Ralph and Vanellope Van Schweetz have been best friends since their misadventures six years prior, hanging out every night after work in Litwak's Family Fun Center and Arcade. While Ralph is content with his current life, Vanellope admits to being bored with her game's predictability and wishes for something new. The next day, Ralph attempts to fulfill her desires by creating a secret bonus track during a race. Vanellope overrides player control to test it out, but the resulting conflict between her and the player results with the cabinet's steering wheel being broken. Since the company that made Sugar Rush is defunct, one of the kids finds a replacement for Mr. Litwak on eBay. Litwak finds it too expensive and has no choice but to unplug Sugar Rush, leaving the game's characters homeless.
Starring, John C. Reilly, Sarah Silverman, Gal Gadot. 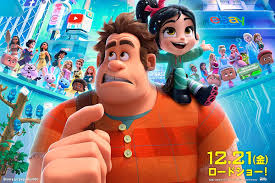 Chris’s quotable gags and rapid freestyle raps have established him as one of the most in-demand acts on the corporate circuit, and at comedy clubs around the world.

Bertolucci’s 1990 drama sends an American couple deep into the Sahara Desert, where they discover the transporting power of landscape and culture and learn the distinction between being a tourist a