Voice majors from Sonoma State will present a concert of the vocal music of the late Leonard Bernstein, composer of such Broadway blockbusters as On The Town and West Side Story and Laureate Conductor of the New York Philharmonic from 1943-1990. Selections will include music from Bernstein’s Musical Theatre and Classical songs.

Vocal Repertory Class is delighted to appear on the Jewish Music Series singing selections from the vocal music of the great Leonard Bernstein. The singers will perform songs, duets, and scenes from Bernstein’s incredibly varied vocal works, including art songs in French, religious songs in Hebrew, and various styles of music theater. Fans of West Side Story won’t go home disappointed, but everyone will have the chance to hear rarely performed and wonderful music from this complex and fascinating composer.

No Tickets; Registration is Required

*All in-person performances are subject to change if necessary. Notice will be given if a change occurs. 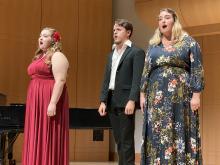