Sonoma Film Institute: THEY ALL LAUGHED

Peter Bogdanovich’s hectic comedy centers on three detectives (Ben Gazzara, John Ritter, Blaine Novak), their various romantic entanglements and the women they fall in love with whom they have been hired to follow (Audrey Hepburn, in her penultimate big-screen role, Colleen Camp, Dorothy Stratten and a fetching Patti Hansen). While poorly received at the time, the comical, heartfelt and personal picture has risen in stature over the last few years, with filmmakers like Quentin Tarantino, Wes Anderson and Noah Baumbach all noting their personal affection for it. This Bittersweet (lower case b for bittersweet) roundelay is shot entirely on location and captures a New York rarely seen in movies. “Peter Bogdanovich’s THEY ALL ALUGHED is a gem. A minor miracle of a movie that is so delicate, so perfectly put together, and yet somehow so fragile that if you remove one element, one take even, the entire thing would unravel. It’s a whodunit. I suppose, with various characters running around New York following each other and spying on one another, but Bogdanovich seems to think that is the secondary plot of THEY ALL LAUGHED, the first being just putting all these crazy people into the same movie and seeing what would happen.”- Sheila O'Malley

View THEY ALL LAUGHED Trailer 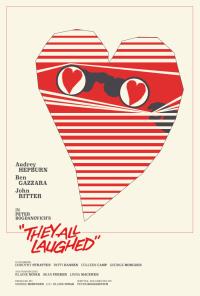 Please join us for the Chemistry Seminar series with speaker: TBD.